Oleksa Zaryckyj was born October 17, 1912 in the village of Bilco, region of Ukraine in Lviv (Lvov). In 1931 he entered the seminary in Lviv and five years after he was ordained to the priesthood by Metropolitan Sheptytsky as a diocesan priest of the Archeparchy of Lviv of the Ukrainians. In 1948 he was captured by the Bolsheviks and was sentenced to ten years in prison and deported to Karaganda in Kazakhstan. Released early in 1957, Oleksa Zaryckyj was appointed Apostolic Administrator of Kazakhstan and Siberia, but did not have time to receive episcopal consecration. Shortly after he was re-interned in concentration camp Dolinka near Karaganda, where he died a martyr of the faith October 30, 1963. He was beatified by Pope John Paul II June 27, 2001, along with 24 other victims of the Soviet regime of Ukrainian nationality.

Roman Martyrology: In the town of Dolinka near Karaganda in Kazakhstan, blessed Zaryckyj Alessio, Priest and Martyr, who was deported under a regime hostile to God in a prison camp, in fighting for the faith gained eternal life. 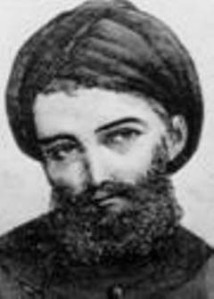 Today the Church remembers the many Martyrs, ancient and modern. For example, the massive group of those killed in Korea in the nineteenth century. Jean-Charles Cornay was a French priest who, instead, was killed in contempt of faith in Tonkin (Vietnam). And in a very bloody: he was torn to pieces. He belonged to the Institute for Foreign Missions of Paris and had arrived in Macao. Precusagli the way to China, his goal, he remained in Tonkin. Here he was betrayed, falsely accused of fomenting an insurgency, tortured, and – after refusing to recant – sentenced to death in 1837 at age 28.

Roman Martyrology: In the fortress of Son-Tay Tonkin, now Vietnam, San Giovanni Carlo Cornay, priest of the Society for Foreign Missions of Paris, and Martyr, who, after cruel tortures, by decree of Emperor Minh M Ng was rendered into pieces and eventually beheaded for his Christian faith.

Many missionaries and indigenous Christians sprayed the Vietnamese earth with their blood, being killed for their faith in God. 117 of them, Tonkin Martyrs, were canonized in Rome June 19, 1988 by Pope John Paul II and among them was the French priest Jean-Charles Cornay.

Born in Loundun, in the French department of Vienne, 27 February 1809, his parents were Jean-Baptiste and Françoise Mayaud, they raised him and his two sisters in the faith. Subsequently he studied at the college of Saint-Louis, Saumur and later with the Jesuits of montmorillonite. He wast a regular student, humble and with a gentle character.

His vocation surprised his parents; when he expressed the desire to become a missionary he was met with reluctance and misunderstanding. He had to start his first battle at a time to respond positively to the call of God, opposing the opinion of parents, while affirming his filial love.

He spent a brief period at the Seminary of Foreign Missions of Paris, a period of uncertainty due to the revolution of July, in which the seminary was a target. Jean-Charles recorded it in his memoirs: “Hier on penetrate dans notre séminaire et l’on a affiché sept ou huit portant Mort aux billets Jésuites de la rue du Bac, et comme poignard a signature”.

His departure was sudden for Cornay replaced another missionary. His destination was to be Seu-Tchouan in China two thousand kilometers from the coast. He landed in Macau after six months of travel. Had to reach Tonkin, but the two guides sent to meet him never arrived. Jean-Charles Cornay finally arrived in Tonkin in 1831, the height of anti-Christian persecution.

As time passed, his hopes of reaching China one day decreased. He decided to remain in this land and on April 26, 1834 he was ordained to the priesthood by Bishop at Havard Hanio after a trip on the Red River disguised as Chinese. During the grueling period in which he exercised his ministry he was always calm, cheerful and characterized by a spirit of holiness.

In 1835 he was arrested by French missionaries and others against him, the authorities forged a charge of treason for having buried the weapons in a land they tilled. He was then locked in a series of bamboo cages, a torture very common in Vietnam at that time, and since he was young and had a beautiful voice was forced to sing for his persecutors, but he chose to sing the Salve Regina. Finally he was sentenced to death by the court subremo and, on the orders of Emperor Minh Mang, beheaded September 20, 1837 at the fortitude of Son Tay.

In his last letter to his parents, he wrote: “You will receive Lorsque cette lettre, mon cher père, ma chere mere, affligez ne vous pas de ma mort, en consentant à mon départ, vous avez déjà fait la plus grande partie du sacrifice. Under the terms of the award, his body was then “cut into pieces and […] the head, after being exposed for three days, […] thrown into the river.” The courageous example of Cornay determined the vocation of St. Theophane Venard. The Martyrologium Romanum today commemorates St Giancarlo Cornay, on the anniversary of his birth into heaven.

Roman Martyrology: In the village of the Genoese in the territory of Valencia, Spain, Blessed Giuseppe Maria Segura Penadés, Priest and Martyr whose blood was shed blood in the same persecution as Christ.

Beatified as one of 233 Spanish Matryrs of Valencia by Pope John Paul on March 11, 2001, he is part of the subgroup known as Jose Aparicio Sanz and 73 companions, priests and laity of the Archdiocese of Valencia.

He is remembered on August 30

Roman Martyrology: In Bilbao also in Spain, blessed Cabanes Badenas Vincent, a priest of the Third Order of St. Francis of the hooded Sorrows of the Blessed Virgin and martyr, who, during the same persecution against the faith, deserved to be admitted to the eternal banquet.

He was Beatified as one of the Blessed Martyrs of Our Spanish Tertiary Capuchin, 19 Spanish members of the Congregation of Our Lady of Sorrows Capuchin Tertiary (or Amigoniani), founded by Venerable Louis Amigo y Rerrer, and a sister, also a Capuchin Tertiary, victims of religious persecution of the Spanish Civil War (1936-39), a sub-group of the 233 victims of the Spanish Civil War Beatified by Pope John Paul on March 11, 2001 .

“ Badenas Cabanes, Vincenzo, eldest of four siblings, was born February 25 1908, in Torrent (Valencia). He had pronounced his religious vows and completed sludi philosophical and theological, March 12, 1932 he was ordained a priest in Madrid. In the set. “ 1933 was rated top of the reformatory of the Prince of Asturias, in Madrid, and optics. the following year he went on to head the Cabinet of psycho-pedagogy of the reformatory Amurrio (Alava), where he was surprised the civil war broke out July 18, 1936.

On the evening of September 27 the same year, militants arrested him in the house where he had fled. During the ride to Orduna (Vizcaya) demanded that the murderers to deny the German, but he opposed proudly displaying the crucifix. Once in Orduna did get in a ditch near the Prado de San Bartolomé where they shot him with several gunshots. Abandoned and badly wounded, managed to crawl to the first houses in the country, where the family Elejalde Arroyo welcomed him: the priest asked for a doctor and a priest. During the night, still clutching the crucifix, he was transferred to the hospital of Basurto (Bilbao). When asked to explain what had happened, he replied: “Do not ask me these things, I speak only of God Let us pray, the pardon of those who have wounded heart,” and did not reveal the names of those who had sho himt. Died September 29, 1936, after two days of great suffering. His remains rest in the ‘chapel of the martyrs, “the convent of Mount Sion in Torrent (Valencia).

“ The cause of canonization of these twenty religious martyrs was conducted at the archidioccsi of Valencia together with seven other cases relating to as many cases of the martyrdom of members of different religious orders and congregations. In 1993-94 was issued the decree of validity of the unified diocesan process of these causes, May 13 1997 the Positio super martyrdom was delivered to the Congregation for the Causes of Saints.

Roman Martyrology: In the village of Híjar always at Teruel in Spain, blessed Francis Monzón Romeo, Priest and Martyr of the Order of Preachers, who in the same persecution confirmed with blood for his fidelity to the Lord. 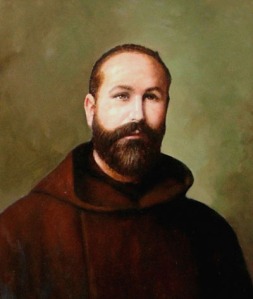 Roman Martyrology: Near the village of Viñales still in the same area, blessed Aurelio (Joseph) Ample Alcaide, Order of Friars Minor Capuchin Priest and Martyr, who, during the same period in the battle for the faith brought the glorious prize.

Was born February 3, 1896 in Viñales (Valencia), third of seven children who were spouses D. Ample and Donna Manuela Vicente Alcaide. He was baptized the day after birth, ie February 4, in the parish of San Honorato bishop, and received Confirmation April 21, 1899.

“ He first studied the Seraphic Seminary of Massamagrell (Valencia). Wore the Capuchin habit in 1912, he made his temporary profession of vows on, August 10, 1913 and perpetual December 18, 1917. He was then sent to Rome to perfect himself in his studies and was ordained a priest in the Eternal City March 26, 1921 by the Archbishop of Filipos, Bishop Joseph Palica. Back in Spain, he was appointed director of the student of philosophy and theology of the Capuchins in Orihuela (Alicante), office held, and overall satisfaction with care until death.

“ “Among the faithful he enjoyed the reputation of a saint – said the priest Worker Diocesan D. Pascual Ortells – and that fame also joined the test. Was faithful observant of all the rules of St. Francis, commit itself to helping its total so that young men were perfect. “

“ During the Revolution of 1936 all the religious of the convent of Orihuela dispersed on July 13. P. Aurelio sought refuge in the family home in Viñales, in which, on 28 August, was captured by gunmen and taken to his place of death. Before being killed he urged all his comrades to die well, gave them absolution, and then added, “Cry aloud, live Christ the King.”

“ He was killed August 28, 1936. His body was interred in the cemetery of Foyos (Valencia), near where he had been killed. After the civil war, his remains were exhumed and carried into the cemetery Vinalesa September 17, 1937. He is currently buried in the chapel of the convent of the Capuchin martyrs Maddalena Massamagrell.

“ P. Aurelio retain the use within, since he was captured until death, all remaining faithful to Christ. “He kept the peace until the last moment – he says Rafael Rodrigo, the witness of his martyrdom – encouraging all of us that we were going to die. When everything was ready for execution, urges us to recite the formula of the act of contrition. So we did, and when the Servant of God was reciting the formula of a militiaman gave him two slaps. One of the militiamen said to his companion not to slap him more, because it was not worth the trouble, given the time of life we have left. The Servant of God remained unchanged and continued to injury before the acquittal until the end. As soon as the Servant of God had finished his sacred duty, a volley rang out and we fell with him all repeating the cry: ‘Long live Christ the King!’.

He was Beatified as one of the Blessed Spanish Capuchins, Martyrs of Valencia, 12 friars and 5 Poor Clares, who suffered martyrdom during the civil war and religious persecution that through their homeland in the 30s of the twentieth century. Pope John Paul II Beatified them on March 11, 2001, together with a group totaling 233 martyrs of the same persecution.

The Black Cordelias
Create a free website or blog at WordPress.com.