Who was Buried in the Apostle Paul’s Tomb?

Tomb believed to be the Apostle Paul’s

The Vatican announced, at the close of the Pauline year, that analysis on bones buried in what is believed to be the tomb of the Apostle Paul, indicates the bones are from the proper time period.

You’ve got to love Catholicism; the Vatican finds all kinds of things located where tradition has put them.

In addition, the Vatican announced the finding of a 4th century portrait of St. Paul, which is the oldest known image of the saint.

Grace from God in this Pauline year.

Evangelicals: Change of Heart toward Catholics 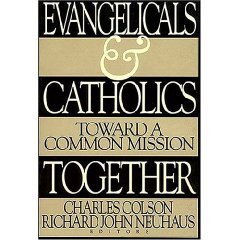 Evangelicals have been going through a major change of heart in their view of Catholicism over the past 15 years or so. In the 80’s when I was in college I lived in the Biblebelt and had plenty of experience with Evangelicals–much of it bad experience. The 80’s was the height of the “Are you saved?” question. In Virginia, the question often popped up in the first 10 minutes of getting to know someone. As I look back, Isurmise that this was coached from the pulpit or Sunday school as it was so well coordinated and almost universally applied. It was a good tactic for putting Catholics on the defensive even before it was known that they were Catholic—“ummmm, uhhh, well no, I’m not sure, I’m Catholic.” Then a conversation about works righteousness or saint statues would ensue. Yeah, nice to meet you, too.
Thankfully, those days are pretty much over. We now have formerly rabid anti-Catholics apologizing and even praising the pope. Catholics and Evangelicals have both learned that we have much in common and need each other to face the secular culture with a solid front. But, where did this detente come from? I think there is a real history to be told here and a book should be written. Let me give my perceptions of 7 major developments since 1993, which I regard as the the watershed year for the renewal of the Catholic Church in the United States.

1. The Catechism of the Catholic Church, 1993. When this document came out, it was uncertain that even Catholics would read it. We should have known that something was up when the French version hit the top of the bestsellers charts in France and stayed there for months. The English version did the same in the US. Catholics were reading the Catechism, forming study groups and challenging errant professors in the classroom. END_OF_DOCUMENT_TOKEN_TO_BE_REPLACED