Friday’s Flannery: The Life You Save May Be Your Own, by Flannery O’Connor

One of a series of occasional commentaries on the short stories of Flannery O’Connor, Friday’s Flannery.

This is one tough story, but it cracks open fresh like a newly laid egg when read with an eye for classic Catholic imagery which surrounded Flannery O’Connor and which, as a devout Catholic, inhabited her soul.

It begins with a scene under the setting sun.  Lucynell, the mother, sitting on her front porch with Lucynell her deaf-mute daughter, sizes up a character coming up her long dusty farm drive.  Mr. Shiftlet is a drifter;  he’s one-armed and harmless.  He admires the setting sun and says he’d like to stay in a place that had such a vista every night.  She assured him her place did, every night.

Among their introductory small talk, he asks about an old jalopy in the yard.  She explains it hadn’t run in years, since her husband died.  He, trying to make agreeable small talk and sound profound at the same time, gives a little lecture on a doctor in Atlanta who had removed and held in his hand a human heart.  Mr. Shiftlet declares that no matter how a doctor may cut up a human heart he would not know more about it than he or the old woman did.  She agreed.  He assured her he was a man of moral intelligence, but she is less than convinced at this point.

Being the poor owner of a rundown farm, she could use a hand in exchange for food and a place to sleep, but no pay.  Being a shiftless, one-armed handyman, Mr. Shiftlet hadn’t many options.  He was to sleep in the car.

In the ensuing days, Mr. Shiftlet made great progress fixing things all around the house and farm, even getting the old car working and teaching the daughter Lucynell how to say “bird.”  Seeing the advantages to having a hardworking man around to run things, the mother begins to suggest Mr. Shiftlet marry her daughter.  She had worked a cold business calculus in her mind and figured the shiftless, one armed drifter could be an asset.  She makes known how good an idea it would be as long as he planned on staying.  He could be married, have this house, a place to sleep and good food for life.  He at first put off the idea, knowing full well he had the free spirit of a drifter.  Eventually, he negotiated against his nature.  He’d think of marrying her if he had some money to buy some gas, take her someplace, buy her a meal on their honeymoon.  Settling for $17.50 was as close to romance the drifter and the deaf-mute would come.

Upon leaving the courthouse, he was ill at ease.  It didn’t seem right.  It wasn’t what he expected marriage to be. Lucynell assured him it was a real marriage in the eyes of the law.  So he and his innocent, uncomprehending and trusting bride make off down the road to begin their budget honeymoon.  He stops at a little luncheonette where his wife falls asleep in a booth.  Paying for her meal and explaining to the boy behind the counter that she was a hitchhiker, the heartless Mr. Shiftlet dives off.

Making his way along the highway, he sees a travel safety billboard urging good driving with the assurance that “the life you save may be your own.”  Himself a nomad, he regarded picking up hitchhikers a kind of moral duty.  He stops to pick up a young boy with a large suitcase.  Concerned that the boy is so young and apparently running from home, Mr. Shiftlet begins to talk about how wonderful a good mother is and suggesting how grand this boy’s mother must be.  The boy, in frustration at this barely disguised preaching from a stranger hurls some nasty comments about both their mothers and jumps out of the moving vehicle.

The story ends with Mr. Shiftlet praying to the Lord to wipe all the scum from the earth.  Meanwhile a turnip shaped cloud descends from above and passes over the setting sun.  As it begins to rain, the drifter resumes his travels toward the town of Mobile.

Ok.  What a horrid and pointless story, one would think.  So what can it possibly mean?  What could Flannery be getting at?  One can can find plenty of tortured analyses, expressions of frustration or dismay, or the praises of those who detect an as yet unmastered master, but it is rare to find much insight into the Christian significance of this story.

First, it is important to review a bit Flannery’s motivation in writing.  She says herself that her writing is an attempt to point out the movement of the Holy Spirit in the everyday life.  This movement is mysterious but shows itself often in odd and wonderful ways mostly not apparent to her characters; and like the parables of Jesus, it is only visible to those who have the eyes to see–that is, have the faith and experience to apprehend the spiritual amid the seemingly secular [Matthew 13: 13-17].  In short, her writings are covert critiques of the South’s evangelical culture. They are essentially Catholic riddles.  These riddles or parables give the evangelical or secular reader enough material to analyze and debate while her larger meaning remains uncannily beyond their grasp.

The elder Lucynelle is a cagey creature.  She does not have much in this world except her daughter and her crumbling farm.  She feels a love for her daughter, she thinks.  But, one wonders how a mother can in a sense sell her daughter into a marriage she does not understand. For what? … to have someone around to take care of the place.  It is a good business deal but betrays the very meaning of the love a mother ought to have for her children, not to mention the love within marriage.  The mother is blind to the sacred nature of her maternal duty to protect her child and even more uncomprehending of the sacred nature of marriage.  Missing the sacred, she betrays it for 17 and a half proverbial pieces of silver.

Lucynelle the younger, is a simple spirit almost utterly lacking in comprehension of her surroundings.  She is an innocent.  Flannery writes in an age fascinated by the miraculous liberation of Helen Keller’s great mind and spirit from the prison of a deaf-mute’s body.  Implicitly, Flannery asks her readers about the value of a less than bright deaf-mute.  What is her worth?  The reader calculates along with the mother and the drifter, is this “girl’s” life worth a lifetime of servitude?  Apparently it is, if only the mother would throw in hot meals and a bit of cash.

A fundamental principal of Catholic marriage is that both parties understand what they are entering into and do so freely.  Flannery may be making a comment about the emptiness of civil marriage since it appears to have been so easy for this wedding to take place.  And though it does not feel like a marriage to Mr. Shiftlett, it indeed qualifies as legal, as the mother assures him.  That the new bride does not understand what has taken place is made clear by her falling asleep on what ought to be the happiest day of her life.

The very brief exchange between Mr. Shiftlet and the boy is an odd one.  The boy in the red hat appears to be more of a sign than a character.  The strained dialogue calls into question the veneer of Southern Christian culture which is always ready to present a front of Christian sounding language without requiring a deeper commitment to the Christian life– a life centered on the self-sacrificing love of Christ refracted in the sacrificial love of parents for children and spouses for each other.  The venom spewed by the boy in the bright red hat is a rebellion against the non-penetrating veneer of Southern Christian chatter. If Christian love is just talk, why live? The boy’s self immolation is a twisted image of Christ’s self-sacrifice on the cross, the latter is replete with love and meaning and promise of resurrection, the former is an empty, senseless death.

The key to this story occurs in the final moments, as they almost always do.  That turnip shaped cloud which passed in front of the sun is not to be disregarded.  A turnip is essentially shaped like the human heart, somewhat round, bulbous and coming to a point.  With the greens included, its outline roughly parallels the image of the Sacred Heart with the flames emerging from the top.  As this turnip shape passes just in front of the sun, the mind’s eye can see the rays of light spreading in all directions just as the Sacred Heart is imaged.  This is a kind of magical realism, Flannery style.  Catholics call it sacramentality–that God communicates his grace through all of the created universe, animate or inanimate, often as a sign.

So, why the sign of the Sacred Heart?  Jesus’ heart is an image of mercy, of self sacrificing love poured out for another, deserving or not.  Is this not what is missing in every character in this story?  Is this not what Mr. Shiftlet was getting at when he claimed the medical doctor knew not more of the human heart than he did?  Was it not love that was missing in the calculated marriage?  Loveless, Mr. Shiftlet, like Jonah could call a damnation upon the earth to wash away the slime. [Jonah 3:10-4:1]  But God is not like Jonah nor Mr. Shiftlet [Jonah 4:11]. Even as he sends us Christ himself, the Father sends his sun to shine on the just and unjust alike, and likewise his life giving rain. [Matthew 5: 45] 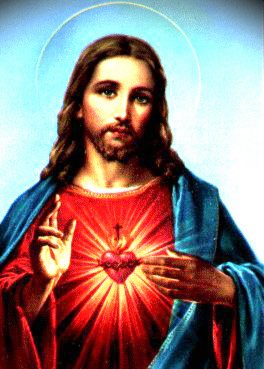 This entry was posted on Friday, April 17th, 2009 at 6:20 am and is filed under Catholic, Fiction, Flannery O'Connor, Fr. J., Literature. You can follow any responses to this entry through the RSS 2.0 feed. You can leave a response, or trackback from your own site.

16 Responses to Friday’s Flannery: The Life You Save May Be Your Own, by Flannery O’Connor