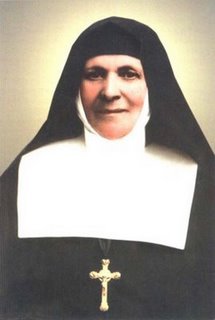 Blessed Mary Boleslava Polish Lament, virgin, grasping the signs of the times, founded the Congregation of the Missionary Sisters of the Holy Family, to promote Christian unity, to help and the last to form Christian female youth.

Roman Martyrology: In the city of Bialystok in Poland, Blessed Mary Boleslava Lament, virgin, in the midst of political upheaval founded the Congregation of the Missionary Sisters of the Holy Family to promote Christian unity, help the poor and train the girls to Christian life.
The eldest of eight children of Martin and Lucia Cyganowska Lament, Lament Boleslava, was born July 3, 1862 at Lowicz in Poland. During her childhood, she had the pain of seeing the death of her little sisters Elena and Leocadia and brother Martin, this was in a time when infant mortality decimated children, reducing the members of many families, the small Boleslava was marked irretrievably from these painful experiences.

After the elementary school and high school, she went to Warsaw, to a school of arts and crafts, where she obtained the diploma of a seamstress; she returned to Lowicz opened a tailoring business with her sister, meanwhile,she lived a life of mind, deeply linked to spirituality. And at 22, in 1884, she decided to join the Congregation of the Family of Mary, which was organized in Warsaw in secrecy, because of czarist persecution.

She was a zealous sister, who was distinguished for the gifts of prayer, meditation, seriousness and loyalty with which she worked his duties. After her novitiate and profession of simple vows, she worked as a teacher of tailoring, a teacher and educator in various houses of the congregation, scattered throughout the territory of the Russian.

But after nine years, before pronouncing her solemn vows, she had a deep crisis that did not feel more secure in her vocation in the congregation, so she went back to her home in Lowicz with the intention, as soon as possible, to enter in an enclosure, with the advice of her confessor, then opted for the works of assistance for the homeless, all of which continued even in Warsaw, when her family moved there, opened here to support a workshop for tailoring with her younger sister Mary.

Soon she was entrusted with the direction of a dormitory for the homeless, who saw her commitment to bring order in the ethics and religious life of its clients. Li was preparing to receive the sacraments, visiting the sick poor in their homes or shelters, took care of children, in 1894, yet the epidemic of cholera led by the father, full of other responsibilities, took her mother and brother Stefano, aged thirteen, who attended school in Warsaw and wanted to become a priest.

She entered the Franciscan Third Order and was then put in contact with the Capuchin friar blessed Onorato Kozminski (1829-1916), founder of several religious congregations, who were working underground, because of political events involving Poland at that time. Once again the death of her family in 1900, taking the young brother Stephen, before his coffin, Boleslava Lament promised to return to the religious life, and two years after the father Onorato did know a lady from Belarus, research Sisters of the Third Order to conduct a house and education to the Dniepr Mogilev.

Boleslava felt the urgent need to establish relationships and contacts to induce the Orthodox to meet with the Catholic Church and at the same time help the Catholic population in order to retain loyal, without giving in to difficulties that have arisen under the czarist regime, therefore, accepted in the assignment 1903 and left for Mogilev in Belarus, a town of about 40,000 inhabitants.

She lived with Leocadia Gorczynska, who directed a workshop for weaving, to teach a trade to the girls of poor families, then Boleslava Lament taken to rent a house of wood and taken to tailor a suit. With admiration for the industriousness of Boleslava, Leocadia Gorczynska decided to go and live with her, the two women joined Lucia Czechowska, at this point Boleslava began to think of founding a congregation, strictly religious, devoted apostolate among the Orthodox.

This could be implemented with the help of Jesuit Father Felice Wiercinski, who contributed directly to the foundation in 1905 the three women began the new congregation, called the “Society of St. Family “, which later changed its name to” Sisters of the Sacred Family “, for which Boleslava was the first Superior.

In the autumn of 1907, Boleslava, with the six nuns of the community of that time, moved to St. Petersburg, where she developed an extensive educational and educational activities, primarily dedicated to the young, and already in 1913 could extend its activities in Finland, and opened a college for girls to Wyborg.

In St. Petersburg she played an intense catechetical, educational and welfare in poorer neighborhoods, striving to create the conditions for a genuine social and ecumenism, to deepen mutual understanding and goodwill between the students and their families, who were different nationalities and religion.

In this context of ecumenism, she took to thinking of setting up a branch in the Congregation of Sisters of separate Eastern rite.

The life of her institution was not easy, she had to overcome the obstruction of Tsarist religious policy, then to those resulting from the First World War and persecution of the Bolsheviks, who seized power in Russia, with the ‘Revolution’ s October “of 1917, so in 1921 she was forced to leave Russia and return to Poland with the intention to resume activities at St. Petersburg, when circumstances would permit.

All this brought huge material losses, over the cancellation of her aspirations, even in Poland she found a worrying situation, the congregation lived in poverty, but Boleslava mother Lament with hergreat faith was totally entrusted to the will of God and as they were exceeded that sum of circumstances and social and political influences.

For some months, she directed the work of the sisters in Wolynia, and in 1922 founded a new house in Pomerania in the territories of Eastern Poland, where the population was poor for most of orthodox religion. Starting in 1924, she began to open other nell’archidiocesi Case of Vilna and the Diocese of Pinsk, and in 1935 became the 33 houses scattered somewhat in Poland and even in Rome.

In 1925, mother Boleslava went to Rome for papal approval of the Congregation of the “Sisters of the Holy Family”, but the practice is aground due to lack of clarity about the tasks of the sisters, divided into two branches, apostolic teaching and conduct – home of Case.

In 1935, Mother Mary Boleslava Lament, decided to renounce the post of Superior General for serious health ed’accordo with the new Superior, retired in Bialystok, where despite being elderly and seriously ill, she devoted herself to opening schools, kindergartens, hospice for women alone, a canteen for the unemployed.

The Second World War brought new difficulties to length mother Boleslava, including the Nazi threat, was forced her to change the types of activities tailored to the needs of the time. In 1941 she was struck by paralysis and devoted herself to a life of asceticism, sending valuable advice to sisters.

She died a saintly death in Bialystok on January 29, 1946, at 84 years, and her body was brought into the convent of Ratow and buried in the crypt under the church of S. Antonio.

The Congregation of the “Sisters of the Holy Family”, is widely popular in Poland, Russia, Zambia, Libya, USA and Rome.

On June 5, 1991, Maria Boleslava Lament, was proclaimed blessed by Pope John Paul II in Bialystok, during his apostolic visit to Poland.

This entry was posted on Thursday, January 29th, 2009 at 5:07 am and is filed under Beatified by John Paul II. You can follow any responses to this entry through the RSS 2.0 feed. You can leave a response, or trackback from your own site.