Hermandades: The Pious Brotherhoods of Old and New Spain

To Americans, these penitential brotherhoods dressed in full regalia can seem a bit scary, but their facinating history and devotion is something we should emulate.

Hermandads (hermandades) are usually associated with the processions of statues, paintings, relics or other sacred objects through public plazas and streets on saints’ feast days and especially during Holy Week in cities and towns across Spain, Portugal and their former colonies in Latin America, India and the Philippines.

While the Hermandad’s chief work is to carry the heavy platforms through the streets on these festival days, to be a member one has to agree to perform various spiritual disciplines as preparation, must be an exemplary Catholic, and be active in the charitable works of the Church. These brotherhoods (which can also include women) are a more pious version of the Knights of Columbus found in the US.

Hermandades, which are now experiencing a re-birth with many being founded in the past 20 years, have a rich history dating back to the 12th Century when many were founded to protect pilgrims on their way to the various shrines in Spain and Portugal, especially Santiago de Compostella. In times when the rule of law was weak or broken, it was the hermandades who restored the peace.

Hermandades have been a little like religious communities for lay people with families. They typically wear a habito or habit which they sometimes wear throughout Lent as an outward sign of penitence. Hermandades are penitential in their piety observing long periods of prayer and fasting up to 40 days in preparation for their saint feast and public service. Some hermandades today are made up entirely of reformed alcoholics, or convicts or others who seek to do reparation for their past sins or those of their families or others.

No, the hoods worn have nothing to do with the Klan. They are remnants of the Medieval period when hoods were common attire. Some of these hermandades maintain the anonymity of their membership and thus cover their faces with the hoods when in public.

Brotherhood of the Lord of Miracles 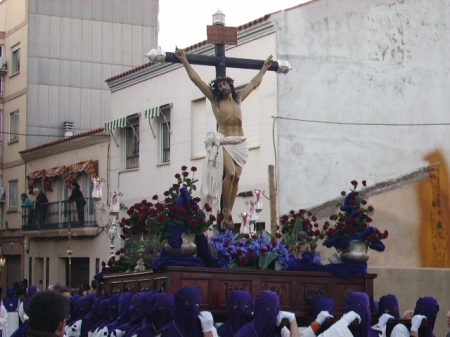 Penitential Brotherhood of the Most Holy Christ of Love (for youth), Carceres, Spain 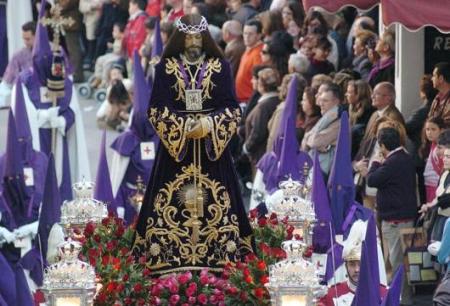 Brotherhood of the Slaves for Ransom

This last depicted event took place on Easter in Valencia, Spain, with the following Hermandades participating:

The Corporation of the Pretorians and Penitents

The Brotherhood of the Sacred Encounter

The Brotherhood of the Capture of Jesus,

The Royal Brotherhood of the Holy Face,

the Royal Brotherhood of the Crucifixion of Jesus,

The Brotherhood of the Most Holy Christ of the Afflicted,

The Brotherhood of the Descent of the Lord,

The Confraternity of the Soldiers of the Virgin of Solitude

The Brotherhood of the Holy Sepulcher

This entry was posted on Wednesday, July 30th, 2008 at 8:11 pm and is filed under Catholic, Catholic Church, Catholic Piety, Feast, Festivals, Fraternal Organization, Fraternity, Good Friday, Hermandad, Hermandades, India, Knights of Columbus, Latin America, Mexico, Philippines, Portugal, Saints, Spain. You can follow any responses to this entry through the RSS 2.0 feed. You can leave a response, or trackback from your own site.

One Response to Hermandades: The Pious Brotherhoods of Old and New Spain